"I designed just over 40 covers in my time as executive creative director at Wired. As you can imagine, some I love and others I hate. That’s the beauty of magazine making…there’s always a new issue next month. I definitely have a few favorites, but one that has really stuck with me is our December 2014 issue guest-edited by Christopher Nolan. (note: as it was also Coverjunkie's favorite of whole 2014)

That issue was a full redesign - our stories broken into five chapters each representing a different dimension. Encompassing that into a singular image or statement was really tough. I designed multiple covers, but ultimately Chris Nolan, Scott Dadich and myself all resonated with the simplicity and mystery of the cover that went to print. I worked with Mario Hugo to illustrate each of the five dimensions represented in the issue (Line, Plane, Space, Time, Multiverse) as well as the cover image. The image represents the reader entering into the first dimension, thus beginning the journey throughout the issue. The last page of the magazine has the cover image inverted, representing the reader’s exit.

The animated version of the cover is my favorite. I worked with animator Anthony Zazzi to bring the sentiment of the cover to life, while keeping the content within the magazine a mystery – inviting the reader to explore themselves, rather than be sold on it via coverlines or content hooks. I feel incredibly lucky to have had the experience of making this issue with my WIRED family and the brilliant creative duo of Chris Nolan and Emma Thomas.

BILLY ABOUT HIS FAVORITE COVER HE JUST WISHED HE DESIGNED HIMSELF:

Billy
There are so many covers I wished I designed. Music is near and dear to me, always gravitating towards record covers, zines, and fliers. So naturally, Fred Woodward’s brilliant designs at Rolling Stone, Rem Duplessis’ covers at SPIN, and David Carson’s Raygun work all resonate deeply.

I remember picking up Raygun #3 as a teenager and reading it repeatedly cover to cover. The design felt like the music I loved. It was punk. It was wrong. It had tension. It broke the rules in ways that made you want to break your own. And years later, that’s what I found with Scott Dadich’s tenure as WIRED’s creative director (2006-2010). He created a visual style that was both swiss and punk rock. It was simultaneously right and wrong. It was inspiring issue after issue. Ultimately, he created one of my favorite covers of all time. Not only do I admire the guts it took to run the most boring thing imaginable on a cover (a math equation), I also love the tension of the font pairings, the scale shift throughout, and how impeccable the tightness of it is. It truly is both swiss and punk. Helluva cover!" 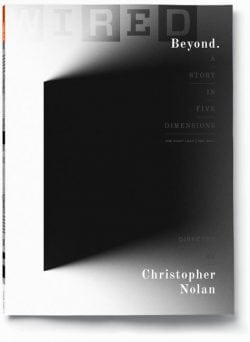